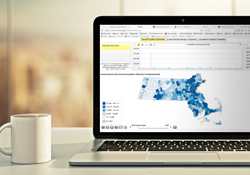 The largest population gains from 2020 to 2021 were estimated in Medford (1,673), Wellesley (889), Plymouth (785), and Barnstable (664), representing a shift in population growth from the largest urban centers in the state, like Cambridge and Boston, into smaller cities and nearby towns located mostly in Middlesex, Plymouth, Worcester and Barnstable Counties.

The town of Berlin stands out as the municipality with the largest percent change with an estimated 12.0% increase in population. In contrast, the four cities which comprise Suffolk County – Revere, Chelsea, Winthrop, and Boston – demonstrated the largest percent decreases in the state at -4.0%, -3.8%, -3.4%, and -2.9%, respectively.

For more information about the Vintage 2021 city and town population estimates, access the interactive dashboard and full UMDI report below.

Annual Estimates of the Resident Population for Minor Civil Divisions in Massachusetts: April 1, 2010 to July 1, 2021