Data show strong growth for Massachusetts, outpacing that of the U.S., declares MassBenchmarks Editorial Board

The first quarter of 2021 was marked by a number of positive indicators pointing towards a strong economic recovery for the remainder of the year. 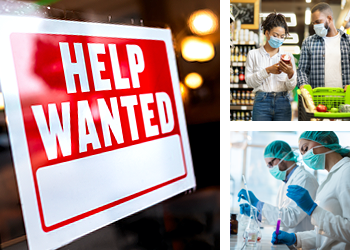 Recent data showed strong growth for Massachusetts, with real gross domestic product (GDP) in the state increasing at a 4.7 percent annualized rate in the fourth quarter of 2020 and at an 11.3 percent annualized rate during the first quarter of 2021. This back-to-back recovery outpaced that of the U.S. economy, which grew at annualized rates of 4.3 percent and 6.4 percent over the same quarterly periods, according to the BEA. These data confirm that the recovery appears to be well underway following the economic crisis caused by the COVID-19 pandemic.

That said, the Board discussed the areas of the economy still lagging in recovery, including the segments of the population most at risk of being left behind as the economy continues to rebound. It then addressed some of the key issues to watch for in the economic recovery over the next year and beyond.

The first quarter of 2021 was marked by a number of positive indicators pointing towards a strong economic recovery for the remainder of the year, boosted by the federal stimulus and the faster than expected distribution of COVID-19 vaccines. As of April 2021, the unemployment rate in Massachusetts stood at 6.5 percent, compared to 6.1 percent for the nation. Massachusetts has the 15th highest unemployment rate in the country, but that rate has fallen sharply since its peak of 16.4 percent in April 2020. That said, current unemployment rates are still elevated far above pre-pandemic levels, the labor force participation rate is still below pre-pandemic levels, and other indicators also suggest that there is significant slack in the labor market. For example, while jobs are recovering at both the state and national levels, payroll employment still has a long way to go before reaching pre-pandemic levels. Massachusetts has recovered only slightly more than half of the jobs lost during the recent economic downturn, as payroll employment as of April 2021 was eight percent below its February 2020 level.

Wage and salary income and consumer spending are almost back to trend. Personal income levels are actually above trend and reflect large federal government stimulus. This has contributed to large increases in spending on nondurable and, particularly, durable goods. On the other hand, spending on services has lagged, awaiting a fuller reopening of the economy. Leisure and hospitality employment is growing the fastest currently, but was decimated by the economic shutdown and still has a long way to go to recover to pre-pandemic levels. Professional, scientific, and technical services and finance continue to fare well in the state, with especially robust employment growth in consulting and research and development. Further, tax revenues in the state are faring better than expected. This was obviously a major concern at the start of the pandemic, especially in regard to what the economic downturn would mean to state and local government budgets and the delivery of essential services to the population.

The Board also examined the international economic situation, which seems to have the potential for an unusually robust recovery. After collapsing in 2020, the global economy and global equity markets have been rebounding spectacularly in response to low interest rates, fiscal stimulus and the easing of COVID restrictions. While the strength and timing of recoveries will differ by country and region, participation should be broad-based. Nevertheless, the near and medium-term prospects remain uncertain. The country-by-country COVID recovery remains uneven and volatile and there is the ever-present risk of economic restrictions being reinstated. Large recessionary episodes typically hinder capital formation, labor force participation, and productivity growth, and there are some concerns that the size of fiscal stimulus and resulting pace of expansion in some countries will reignite inflation. It therefore remains to be seen if the magnitude of policy intervention over the last year will translate into sustained growth.

While it is clear the economy is recovering, the Board spent significant time discussing "recovering for whom." The economic downturn associated with COVID-19 was deeply unequal, with low wage workers in service industries bearing the brunt of the downturn. A significant portion of these workers are people of color and young adults. There was, of course, a robust public policy response to help with household income and housing stability. That said, as these supports sunset, there will continue to be significant concerns about economic vulnerability and labor market scarring for this segment of the population. Similarly, economists and analysts are concerned about the impact of the COVID recession on women, as women make up a disproportionate share of UI claimants and are experiencing decreased labor force participation rates. At its core, the economic downturn exacerbated existing inequalities, and public policy will need to be geared towards helping community stability and job training to reduce long term economic and labor market scarring in the future.

Similarly, the Board was concerned about elements of long-term growth. The Census Bureau estimated that in the year ending in July 1, 2020, the Massachusetts population declined slightly -by 0.02 percent, presumably due to a combination of higher mortality rates and a fall in net international migration related to the pandemic. Since last fall, the state's working-age population has been declining, according to the Bureau of Labor Statistics. Coupling this with any long-term decline in labor force participation rates, particularly for either discouraged workers or older workers who opted to retire early, the potential for economic growth can be limited due to supply side concerns. However, many of our competing states are experiencing similar or more severe trends in labor supply and the prospect of tightening labor markets in Massachusetts triggering increases in wages and labor force participation along with the relaxation of immigration restrictions could ease these supply constraints. Nevertheless, this could mean that Massachusetts may not fully recover the jobs lost due to the pandemic until 2022, 2023, or beyond.

Other long-term questions remain for the economy as well. It is unclear what the post-pandemic world will look like for commercial real estate. There is a sense that the pandemic accelerated long-term trends favoring elements of remote work. While these trends can be empowering for workers, they raise questions about the importance of local labor market characteristics long term, if the location of labor is less critical for employers. Similarly, employers are also grappling with who will need to be in the office and when. This will have ramifications on transportation and childcare needs as well. The implications of these issues are very uneven, as high-income workers have more resources and flexibility at their disposal than lower-income workers.

In summary, however, the prognosis for the Massachusetts economy for the rest of 2021 is quite positive. As vaccination rates rise and social distancing restrictions are loosened, it is expected that pent-up demand will help drive the economy over the next few quarters, as we saw in the first quarter of 2021. While it is unclear what will happen with other forms of economic stimulus, any infrastructure investments from the federal government will only further help to move the economy ahead. That said, policy makers need to continue to strive for a broadly inclusive recovery and be proactive in helping stabilize communities and reducing long-term economic and labor market ill effects for those portions of the population most negatively impacted by the pandemic.

This summary reflects the discussion of the members of the Editorial Board of MassBenchmarks at its meeting in May 2021. It was prepared by Dr. Mark Melnik, Senior Managing Editor, and was reviewed and edited by the members of the Editorial Board. While discussion among the Board members was spirited and individual Board members hold a wide variety of views on current economic conditions, this summary reflects the consensus view of the Board regarding the current state of the Massachusetts economy.