Continued positive growth in the state and nation, but rising new concerns surrounding the pandemic, declares MassBenchmarks Editorial Board

Return of pandemic uncertainty due to the emergence of Delta and other variants, and inflationary pressures on the economy raise new short-term concerns. 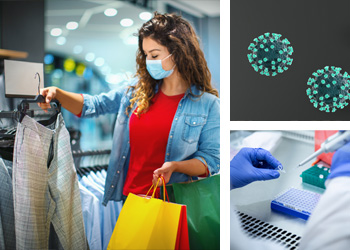 Trends in wages and consumer spending also indicate a strong recovery. Consumer spending, personal income, and wage and salary income are close to back to trend. Gains in personal income in 2021 are buoyed primarily by two rounds of stimulus checks and secondarily by unemployment income supplements. Unemployment insurance income support is still significant but is expected to wane in the third and fourth quarters as the economy continues to recover and supplemental federal supports expire. Spending on goods is way above trend. For durable goods especially, this is unlikely to continue for the time being. As social distancing measures were reduced, spending on services continues to rebound but is still below trend.

Despite these positive indicators, the Board discussed a number of areas of concern as it relates to the current recovery, most notably the persistent gap in employment between Massachusetts and the U.S., the emerging 4th wave of COVID-19, and concerns about consumer prices and inflation.

First, in terms of the persistent employment gap between the Massachusetts and the U.S., both the U.S. and the state continue to be below their February 2020 employment peaks. The U.S. is about 4.5 percent below its February 2020 peak, while Massachusetts is 7.5 percent below peak. While the state economy has recovered well over the last several quarters, this gap in employment has barely narrowed between the state and nation. It is not abundantly clear in the data why this gap persists. Labor force participation in the state is higher than the U.S. The working age population in the state has declined slightly, but not to a level to account for the employment difference in the state and nation. The Board theorized it could possibly be due to more Massachusetts workers participating in the "gig economy" or other elements of non-payroll, contract work or fewer people working multiple jobs. This is an issue we will continue to monitor during the recovery.

The emergence of Delta and other variants of COVID-19 have spurred a 4th wave of the pandemic. This creates a significant amount of uncertainty in the coming months for the economy. While the 4th wave is most significantly impacting areas of the country with low vaccination rates, it is not clear yet how disruptive this wave will ultimately be to people's everyday lives and what social distancing measures may ultimately return. Further, significant rebounds of COVID-19 nationally or globally can have impacts on global supply chains, which already appear to be taxed by the pandemic.

The Board also discussed inflation. Analysts continued to be concerned about rising prices. Disruptions in the global supply chain at the onset of COVID-19 has led to elements of cost push inflation as production of key components in high global demand were affected. In some cases, these supply chain and production issues persist to the present day (e.g., computer chips). Similarly, proactive monetary and fiscal policy (e.g., transfer payments, low interest rates) were put in place to help stabilize and stimulate the economy. Household spending and consumption increased, which can lead to increases in prices in demand pull inflation. While there is not broad agreement among the Board, nor other economic analysts, whether the rise in prices is temporary or the long-term likelihood of significant inflation, it is certainly worth monitoring closely in the coming months.

In short, the state and national economy continue to perform well, but the return of pandemic uncertainty between the emergence of Delta and other variants of COVID-19, and inflationary pressures on the economy, raise new short-term concerns about the economic recovery. As we have stated numerous times in this space, controlling the public health crisis is unquestionably the best long-term economic policy as it reduces uncertainty and stabilizes national and global supply chains.

This summary reflects the discussion of the members of the Editorial Board of MassBenchmarks at its meeting in August 2021. It was prepared by Dr. Mark Melnik, Senior Managing Editor, and was reviewed and edited by the members of the Editorial Board. While discussion among the Board members was spirited and individual Board members hold a wide variety of views on current economic conditions, this summary reflects the consensus view of the Board regarding the current state of the Massachusetts economy.