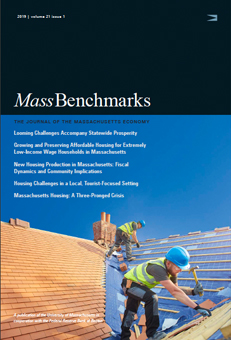 Economic Currents: Looming Challenges Accompany Statewide Prosperity
Mark Melnik and Robert Nakosteen
Massachusetts' GDP growth remains above trend and its unemployment rate remains below 4%. Improvements in growth and unemployment, in fact, have fanned out to some of the Gateway Cities. At the same time, the state must contend with soaring housing costs, longer commutes, and volatile federal immigration and trade policies.

Growing and Preserving Affordable Housing for Extremely Low-Income Households in Massachusetts
Nicholas Chiumenti
Because the private market offers few affordable housing options for extremely low-income (ELI) households in Massachusetts, they must rely on public sector subsidies like rental vouchers. A potential crisis is on the horizon, with subsidies for more than 9,000 ELI-occupied affordable housing units—most of them in the state's three largest cities—scheduled to expire by 2025.

The Fiscal Impact of New Housing Production in Massachusetts
Elise Rapoza and Michael Goodman
An argument against new housing development contends that new residents—especially in multi-family housing—will have a negative fiscal impact on communities. A new study finds that housing development offers net fiscal benefit to both municipalities and the state. And analytical validation of a second study demonstrates that housing production fails to predict enrollment changes in the state's school districts.