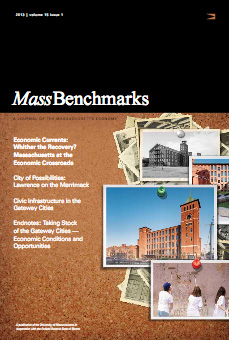 Economic Currents: Whither the Recovery?
Massachusetts at the Economic Crossroads

The Massachusetts economy appears to be slowing even as it continues to face considerable headwinds, including federal fiscal policies and international economic conditions.
- Michael Goodman & Robert Nakosteen

City of Possibilities: Lawrence on the Merrimack
An anatomy of recent private and public investments in Lawrence, Massachusetts paints a hopeful future.
- Robert Forrant

Endnotes: Taking Stock of the Gateway Cities — Economic Conditions and Opportunities
Massachusetts’ Gateway Cities continue to lag economically but investments in infrastructure, education, and economic incentives are setting the stage for a brighter future.
- Daniel Hodge