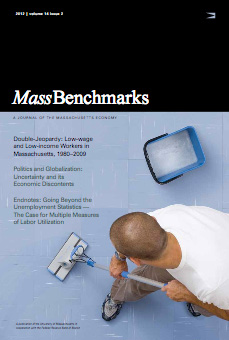 Economic Currents: Politics and Globalization — Uncertainty and its Economic Discontents
The Massachusetts economy’s moderate recovery continues to face serious headwinds including the looming fiscal cliff, the evolving crisis in the Eurozone, and slowing national and international growth.
- Michael Goodman and Robert Nakosteen

Endnotes: Going Beyond the Unemployment Statistics
The Case for Multiple Measures of Labor Utilization
A more sobering picture of labor underutilization emerges when considering under-employment, “hidden” unemployment, and mal-employment alongside the traditional unemployment measure.
- Andrew Sum and Ishwar Khatiawada