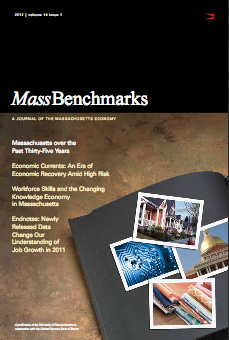 Excerpts from the Board
The board tempers positive gains in Massachusetts’ economy with cautious optimism due to influences beyond the state’s borders and challenges faced by blue collar and younger workers.

Massachusetts over the Past Thirty-Five Years
Thirty-five years of relative economic success in Massachusetts reflects the adaptability of its innovation economy and leadership in higher education.
- Lynn Browne

Endnotes: Newly Released Data Change Our Understanding of Job Growth in 2011
A recent revision in the estimated number of new jobs created in Massachusetts gives us an opportunity to look under the hood at how estimates for this indicator are posited and revised.
- Alan Clayton-Matthews