Low wage sectors, urban areas, and communities of color are being disproportionately affected by the public health and economic consequences of COVID-19 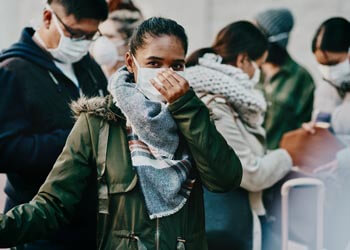 The MassBenchmarks Board continued to focus its attention on the unprecedented economic devastation experienced both nationally and throughout the Commonwealth due to the COVID-19 pandemic during its most recent meeting. Since our last meeting in June, the summer months showed a slowly improving national economy, as states embarked to differing degrees on reopening offices, eating establishments, and other types of businesses. The national unemployment rate for September stood at 7.9 percent (down from a peak of 14.7 percent in April, but still well above the pre-pandemic low of 3.5 percent in February). In September, nationwide total nonfarm payroll employment rose by 661,000 compared to the previous month; but there were still 10.7 million fewer jobs than at February's peak of 152.5 million.

The situation in Massachusetts appeared to be much worse, as measured by unemployment. In June, Massachusetts recorded the nation's highest state unemployment rate, peaking at 17.7 and remaining at 16 percent or more from April through July. By August, the state's unemployment rate had dropped to 11.3 percent but still ranked 6th highest in the nation, tied with New Mexico and exceeded only by Nevada, Rhode Island, New York, Hawaii, and California. While a five-percentage point decrease in the state's unemployment rate is certainly good news, the recent decline appears more due to people dropping out of the labor force (-127,600 people) than to individuals gaining jobs (+65,500). The number of new filers for state unemployment insurance benefits also continues to be high, with between 14,000 and 18,000 new claims every week since August, and over 22,000 in the weeks ending September 19th and 26th. Since March 15th, nearly 1.3 million Massachusetts residents filed initial claims for regular unemployment insurance.

The Board devoted much of its meeting to discussing why the Massachusetts unemployment rate stands out among other states during this current recession. There was broad agreement that the Commonwealth's proactive public strategies for containing COVID-19 impacted both the unemployment rate and job growth through the summer. Overall, the northeastern part of the U.S. suffered from the most significant initial outbreaks of the virus. The Commonwealth's extensive stay at home orders in the spring and cautious reopening strategy in the summer naturally slowed economic recovery compared to some other states. Additionally, industries like health care and higher education, which often serve as employment buffers during typical economic downturns, experienced significant interruptions and instability over the last several months.

That said, some Board members raised concerns about the methodology used to estimate monthly unemployment, employment, and unemployment rates at the state level. The Current Population Survey (CPS) is the "gold standard" for measuring national unemployment rates monthly, but the sample sizes at the state level are too small to provide similar accuracy. To overcome this problem, the U.S. Bureau of Labor Statistics (BLS) has developed separate models for each state to estimate the "true" unemployment rate. These models have worked reasonably well in normal times. However, they have produced some unusual highs and lows in the pandemic environment. Accordingly, monthly state employment and labor force estimates should be interpreted with caution. This is not to minimize the significance of the high unemployment rate in Massachusetts. There is undoubtedly a continuing need for robust unemployment insurance benefits and other policies (e.g., emergency rental relief programs) to mitigate the economic hardships experienced by many in the state.

The economic consequences of COVID-19 are exacerbating economic and racial inequality and have a disparate negative impact on urban and densely populated communities. These communities are home to some of the state's most vulnerable households. The industries hardest hit thus far are generally lower-wage sectors. Unemployment rates for persons of color started higher and have risen faster than for whites. From the national employment report for September, the U.S. unemployment rates by race were: whites 7.0 percent, Blacks 12.1 percent, Hispanics 10.3 percent, and Asians 8.9 percent. For Massachusetts, the August CPS data reveal unemployment rates (not seasonally adjusted) of 9 percent for white non-Hispanics and 13 percent for persons of color and Hispanics (data by race for the state are unpublished and limited to just two groups because of smaller sample sizes).

The U.S. Bureau of Economic Analysis (BEA) recently reported that GDP in Massachusetts contracted at a 31.6 percent annual rate, compared to a negative 31.4 percent rate for the nation in the second quarter, despite the fact the shutdown in Massachusetts was earlier, more extensive, and more prolonged than in many other states. In terms of payroll employment, industries such as leisure, hospitality, and tourism and health care and social assistance were hit hardest, followed by "other services," including personal services such as barbers, auto repair, and household services workers. Notably, manufacturing has fared better than payroll employment as a whole in Massachusetts. Job losses in professional and business services and finance were comparatively low because these are typically sectors that can accommodate remote work. Nevertheless, these better-performing industries were not able to offset losses elsewhere in the Massachusetts economy.

The Board also discussed some of the longer-term ramifications of the economic crisis. Typically, there is significant scarring that comes from long periods of unemployment. As long as supply chain bottlenecks exist and social-distancing restrictions remain in place, there will be significant constraints on growth and negative consequences for the state and national economy.

With an unclear end to the pandemic coupled with the Presidential election and an uncertain business climate, unsettled times lie ahead for the economy. While the Massachusetts economy has performed better in recent months, concerns about a viral resurgence and uncertainty about the availability of additional federal disaster aid make it challenging to forecast the state economy's outlook in the coming months.

The Board looked to the recent signs of recovery in the national economy and at the September Wall Street Journal Survey of Economists for insight into the expected shape of a future recovery. The survey estimated 24 percent growth in real GDP in the third quarter, 5 percent in the fourth quarter, and 4.4 percent in the first quarter of 2021. These estimates are higher than prior estimates, reflecting the modest improvement in the national economy's performance over the last few months. Similarly, the Survey of Economists anticipates a slow decline in unemployment over the next year, with U.S. unemployment falling to 8.1 percent nationally by December, 7.1 percent by June 2021, and 6.3 percent by the end of 2021. The majority of surveyed economists (68.5 percent) continue to anticipate a "Nike swoosh"-shaped recession and recovery, or a sharp drop with slow, gradual recovery over time.

Board members generally agreed with these survey results. Still, they expressed some concern that the apparent decline in consumer spending associated with the expiration of enhanced unemployment benefits will further slow the pace of recovery. It continues to be paramount for public policymakers to focus on controlling the pandemic and on finding ways to help support workers and families until the public health crisis has abated and the associated constraints on economic growth recede.

This summary reflects the discussion of the members of the Editorial Board of MassBenchmarks at its meeting in September 2020. It was prepared by Dr. Mark Melnik, Senior Managing Editor, and was reviewed and edited by the members of the Editorial Board. While discussion among the Board members was spirited and individual Board members hold a wide variety of views on current economic conditions, this summary reflects the consensus view of the Board regarding the current state of the Massachusetts economy.

Back
Home
Business GroupsEconomic and Public Policy ResearchMassBenchmarksExcerpts from the Board - October 13, 2020
Top of Page