The state and U.S. economy slows substantially in Q4, as COVID-19 resurges, declares the MassBenchmarks Editorial Board 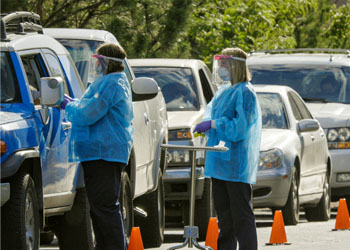 The most recent MassBenchmarks Board meeting was held in early January. The period between our fall and winter meetings was extraordinarily eventful, including the beginning of the much anticipated "second wave" of the COVID-19 outbreak, the development and initial distribution of vaccines, the completion of a contentious federal election, and the unprecedented armed attack on the Capitol Building. All of this speaks to an unsettled and unsteady outlook for the economy in the early stages of 2021.

Following the devastating economic downturn experienced during the spring and early part of the summer, the national and state economies rebounded considerably throughout the third and fourth quarters of 2020. In the second quarter, the gross domestic product (GDP) for Massachusetts and for the United States declined more than 30 percent (at an annualized rate). In the third quarter, both the nation and the state expanded at the fastest pace on record, with both Massachusetts and U.S. GDP increasing slightly more than at a 33 percent rate.

Overall, the shutdown in Massachusetts was more severe than in most states, though that gap has narrowed recently. Buoyed by stronger employment growth in the fourth quarter compared to the U.S., Massachusetts GDP increased at a 7.9 percent annualized rate of growth, according to MassBenchmarks, while U.S. GDP increased at a 4.0 percent rate according to the U.S. Bureau of Economic Analysis (BEA).

The evident slower growth in the fourth quarter reflects both the intensity of growth in the third quarter, as the economy re-opened in the summer months, as well as the resurgence in COVID-19 cases. While the federal government stimulus package boosted personal income during the pandemic, growth in consumer spending has slowed in recent months as various supports have dried up. Unemployment rates fell during the fourth quarter but remain higher in Massachusetts than in the U.S. and well above pre-pandemic levels. In December 2020 the unemployment rate for Massachusetts stood at 7.4 percent (an increase from 6.7 percent in November) as compared to 6.7 percent for the U.S. Growth is projected to be slow in the first half of 2021, while the country continues to manage the second wave of the COVID outbreak and the distribution of vaccines throughout the population, and awaits a further set of stimulus efforts.

The leisure and hospitality sector and "other services" (which includes a variety of personal service industries, such as dry cleaning, hair and nail salons, automotive repair, etc.) continue to be the hardest hit in the state economy. These are industries where face-to-face interaction is common, if not essential. A number of the state's knowledge and technology-based sectors have managed to weather the pandemic reasonably well. Most industries have experienced at least some job loss, but sectors such as finance and professional and business services are functioning at close to their 2019 job totals. The manufacturing sector in the state suffered significant job losses in April, but has since recovered over two-thirds the number of jobs lost. Construction experienced a massive decline in the spring, but recovered significantly over the summer and fall. The COVID-19 economic downturn continues to disproportionately impact young adults, people of color, women, and low-paid workers, as unemployment claims are particularly elevated within each of these groups.

An additional impact of the pandemic on the Commonwealth is on the total population. The 2020 population estimate from the U.S. Census Bureau (note: not the official 2020 enumeration) showed a slight decrease from 2019. This represents the first population decline in Massachusetts since 2004. The decline is likely due to both higher mortality rates associated with an aging population and the pandemic, as well as lower net international migration in the state, as travel was severely curtailed through much of 2020. Net international migration has driven population growth in Massachusetts for much of the last 30 years.

The Board discussed a number of public policy measures, as a new presidential administration takes office, that would be important for both helping the country out of the pandemic, as well as course correcting lost educational and labor market engagement for impacted populations. Important in this discussion is the balance between instant job generation versus strategic long-term investments that can help remedy negative impacts from the pandemic.

First and foremost, our economic crisis is fundamentally a public health crisis. Effectively managing the second wave of the pandemic and accelerating the rate of vaccine distribution are paramount for unlocking the widely projected economic growth in the second half of 2021. Included in this management is continued policy support for households facing housing instability as a result of the pandemic. Secondly, returning children safely to in-person school full time would both serve a long-term educational benefit, as well as help parents (particularly women) get back into the labor market. Third, robust and targeted infrastructure investment can help serve as a job growth engine as the economy recovers in later 2021 and beyond. This can include investments in K-12 education, energy efficiency, and green infrastructure projects. Fourth, the government should make investments that might help reduce labor market scarring for individuals who faced long-term unemployment in the pandemic, including adult education and vocational programs. Lastly, the federal government should provide direct aid to state and local governments. State and local government revenue losses can lead to interruptions in critical services to populations most vulnerable and in need during the pandemic, as well as further exacerbate economic instability overall.

The pandemic revealed significant social and economic inequalities. Further public policy interventions should target areas and populations in the most need, including densely populated areas where the virus outbreak and the economic effects were the worst. This can include targeting Payroll Protection Plan (PPP) loans to more small businesses, especially minority and women owned businesses.

In short, the economy is facing a vulnerable moment, but is poised for growth in the second half of 2021 and beyond. It is critically important for the government to manage the second wave outbreak of COVID-19 competently and improve the vaccine rollout in the coming months. Beyond that, there are a number of ways for the federal government to invest in communities to help stimulate the economy in coming years, thereby helping to reduce the long-term effects of the pandemic on impacted communities. The Benchmarks Board urges our elected officials to be proactive in investing in short and long-term solutions to build an economy that is stronger and more equitable in the coming year.

This summary reflects the discussion of the members of the Editorial Board of MassBenchmarks at its meeting in January 2021. It was prepared by Dr. Mark Melnik, Senior Managing Editor, and was reviewed and edited by the members of the Editorial Board. While discussion among the Board members was spirited and individual Board members hold a wide variety of views on current economic conditions, this summary reflects the consensus view of the Board regarding the current state of the Massachusetts economy.

Back
Home
Business GroupsEconomic and Public Policy ResearchMassBenchmarksExcerpts from the Board - February 9, 2021
Top of Page