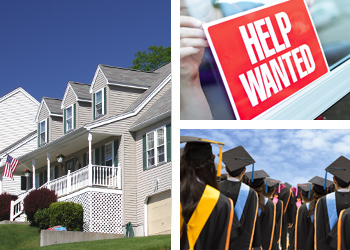 The state economy is "at the top of the cycle". On all fronts things are going well. Unemployment is low and falling including in regions and among demographic groups that have been slow to benefit from an economic expansion that is now in its eighth year. State gross domestic product continues to grow steadily and while slowing, it continues to equal or exceed the national rate of economic growth.

The housing market is strong, as can be seen in healthy increases in home prices. This is, of course, a blessing to home owners but a burden to those looking to buy, many of whom are finding it increasingly difficult to find market rate housing at prices they can afford. This challenge is especially acute in the Greater Boston area.

Multifamily home building has been robust, while single family construction remains restrained, contributing to historically tight inventories in this segment of the market. Building is increasingly concentrated in the metropolitan Boston area, to the detriment of the remainder of the state.

The broadly defined tech sector accounts for the strong growth in employment. Professional, scientific, and technical employment has grown strongly. The foundational sectors of education and health care continue to grow.

State economic performance is linked, through its industry mix, to national and global growth. Massachusetts' continued economic expansion is predicated on the health of the U.S. economy, as well as economies around the world. At the moment, the future looks bright.

Over the long run, demographic projections make it clear that the growth and composition of the Commonwealth's labor force will constrain the pace of future state economic growth. These demographics represent "headwinds", as do structural problems in the match between needs of growing employers and the skills and experience of the available workforce. The slowing of growth in payroll employment in Massachusetts from 1.6 percent in 2016 to 1.2 percent during 2017 is a clear signal that labor supply is beginning to put downward pressure on our growth during a time when the Massachusetts economy is arguably operating at or rapidly approaching "full capacity."

The majority of our editorial meeting was dedicated to a discussion of state labor force issues led by two Editorial Board members, Dr. Mary Burke from the Federal Reserve Bank of Boston and Dr. Alicia Sasser-Modestino from Northeastern University.

Professor Alicia Sasser Modestino then led a discussion on the roles that skills mismatches and the "up-skilling" of job requirements have been playing in the state labor market during the current business cycle. Her research finds that a 1 percentage point reduction in the local unemployment rate is associated with a roughly 0.27 percentage point reduction in the fraction of jobs requiring at least a bachelor's degree and a roughly 0.23 percentage point reduction in the fraction requiring five or more years of experience. In other words, the tighter the labor market, the more open employers are to reducing the educational and experience required of their prospective employees. She also found that widely reported skills mismatches or "skills gaps" have been greater in magnitude and more persistent over the current business cycle in high-skill and highly specialized occupations.

This summary reflects the discussion of the members of the Editorial Board of MassBenchmarks at its meeting on April 13, 2018. It was prepared by Executive Editor Robert Nakosteen and was reviewed and edited by the members of the Editorial Board. While discussion among the Board members was spirited and individual Board members hold a wide variety of views on current economic conditions, this summary reflects the consensus view of the Board regarding the current state of the Massachusetts economy.

Back
Home
Business GroupsEconomic and Public Policy ResearchMassBenchmarksExcerpt from the Board - May 9, 2018
Top of Page