"Caution is the watchword" declares MassBenchmarks Editorial Board 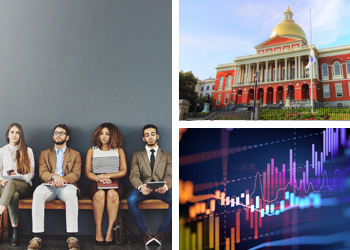 The Massachusetts economy is near full capacity and has experienced consistent growth since the end of the Great Recession in 2009. Employment continues to grow, although there is some reason to expect estimates of recent employment growth will be revised downward later this year. At times during the expansion — including during the past couple of years — employment has grown at a rate equal to or exceeding the national rate. Both wage and salary income and the overall economy, as measured by gross domestic product (GDP), are growing at a pace that mirrors national growth.

At the same time, there are growing concerns about weakening economic conditions nationally and internationally, and the potential for a national recession should these trends continue or in the event of an unexpected shock to the global financial system. The waning impact of recent federal tax cuts, slowing growth in China and Europe, the accumulating impacts of tariffs, and a possible softening in the financial sector are all contributing to emerging caution about the outlook for the U.S. economy over the next several quarters.

Much of the meeting was spent discussing current conditions, recent trends, and their implications for the state's economic outlook. Of particular note was an extended discussion of the Massachusetts productivity advantage and threats to its sustainability. Massachusetts GDP has long been growing at about the national rate, even though long-term state labor force and employment growth has lagged the nation. This clearly demonstrates that the state's productivity growth over the long term has been greater than that of the nation. This productivity advantage is primarily the result of the state's industrial composition, in particular our sizable knowledge and technology intensive sectors. These growing industries rely heavily on a highly educated and technically skilled workforce, which Massachusetts has historically been able to provide.

Preliminary estimates indicate that the state's labor force has been growing at a surprisingly rapid rate of late. These estimates are based on relatively small samples and, given the underlying demographic fundamentals, there is good reason to believe that they will be revised downward later this year. What those same demographic fundamentals make clear is that the Massachusetts economy is heavily reliant on imported labor, primarily through international in-migration. As long as the natural growth in the Massachusetts population (births - deaths) remains slow, we will continue to be dependent on in-migration to sustain our growth. As one Board member noted, only 45 percent of the employees of the state's seminal "professional scientific and technical services" sector were born in the state, 35 percent were born in the US, but out of state, and 20 percent were born outside the US.

Since assuming office, the Trump administration has moved aggressively to restrict the flow of international immigration. The effects on the state are already being felt in the form of labor shortages in a number of major employment sectors, including Travel and Tourism, Agriculture, and Seafood Processing. These same policies have also been discouraging international students from studying in the United States. This directly and negatively affects the Commonwealth's sizable Higher Education sector. It also deprives our growing employers from access to what has been a vital source of technical and professional talent. Additionally, current tariff policies continue to disadvantage our leading exporters, many of whom rely on imported components and intermediate goods and are heavy users of steel and other products that have risen in price as a direct result of current federal trade policies.

Notwithstanding the Commonwealth's strong recovery from the Great Recession, it is a truism that downside risks to the economy grow as economic activity peaks. Accordingly, our consensus view in light of a growing number of emerging risks and economic and political uncertainties is that caution is the watchword.

This summary reflects the discussion of the members of the Editorial Board of MassBenchmarks at its meeting on February 14, 2019. It was prepared by Executive Editor Robert Nakosteen and was reviewed and edited by the members of the Editorial Board. While discussion among the Board members was spirited and individual Board members hold a wide variety of views on current economic conditions, this summary reflects the consensus view of the Board regarding the current state of the Massachusetts economy.

Back
Home
Business GroupsEconomic and Public Policy ResearchMassBenchmarksExcerpt from the Board - March 4, 2019
Top of Page