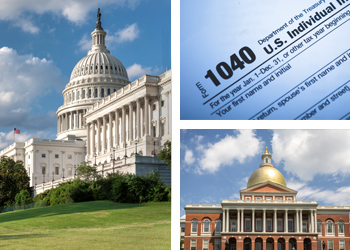 The state's economy is continuing to do well, but some issues are looming. Gross state product has been growing consistently, and employment growth continues to match the national rate. The national economy continues to grow, though the long-running national expansion may be vulnerable to "late-cycle issues," distortions, imbalances, and endogenous risks that tend to arise over time, such as shortages of labor in particular occupations or regions. The condition of the global economy is also encouraging, with most of the recent surprises on the upside. The state's economic performance is linked in important ways to national and global economic performance and current conditions bode well for the Massachusetts economy.

The state is currently confronting two issues, one immediately and one over the long term. The first issue is the recent passage of federal tax cuts. The new tax code contains a variety of changes, which will create some winners and losers among Massachusetts residents and businesses. Lower marginal tax rates, a higher cap on the alternative minimum tax for individuals and families, a doubling of the standard deduction, and a significantly lower federal tax rate on corporate profits will all benefit Massachusetts residents. However, a cap on the deduction of state and local taxes, and the reduction of the allowable interest rate deduction for new mortgages will have a negative impact, especially on the Commonwealth's higher income households. The net effect on the state is not easy to determine at this point, but it does not appear to be large in magnitude based on what we know today.

Over the long run, an older and slow-growing population means sluggish growth in the state's labor force — a slow-moving trend that has been on the horizon for decades. Eventually, this slow labor force growth will become a significant constraint to the state's economic growth unless we see meaningful changes in productivity or a large increase in employment among populations that are currently hard-to-employ. Underlying our slow population growth is a longstanding pattern of families in the state having fewer children than their national counterparts, and having them later in life. The labor force is projected to grow at a slightly slower rate than the state's population, a rate of just below 0.5 percent a year. With a slow "natural rate" of population growth, net migration into the state has been largely responsible for population and labor force growth in Massachusetts for years. Historically, with some cyclical variation, domestic net migration has been negative, with more people leaving the state than relocating to Massachusetts from other states. While we are experiencing strong job growth, which all things being equal should help attract workers and their families to the Commonwealth, high housing costs, particularly in eastern Massachusetts, make it difficult to attract and retain the workers the state needs to sustain its growth. The inflow of international migrants has consistently offset these trends and allowed for our population and labor force to continue to grow, albeit slowly. In this context, recent and proposed changes in federal immigration policy have significant and negative implications for the Commonwealth's labor supply and long-term growth prospects.

The state's economic expansion is now in its ninth year, with more or less continuous growth in gross product and employment for nearly a decade. While the expansion will come to an end at some point, there are no immediate signs that a reversal of fortune is in the offing. That said, recent changes in federal policy have created some angst and uncertainty; and labor force constraints continue to loom as a significant potential drag on the growth trajectory of the state economy.

Back
Home
Business GroupsEconomic and Public Policy ResearchMassBenchmarksExcerpt from the Board - January 22, 2018
Top of Page