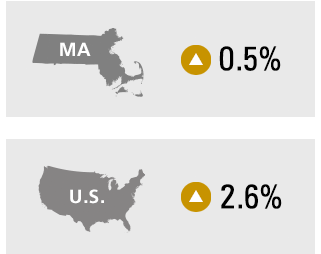 Despite the apparent improvement in output growth in the third quarter, the Massachusetts economy appeared to slow along other dimensions, as job growth decelerated, the labor force shrunk (in absolute terms and as a share of the population), and weaknesses emerged in the sectors most affected by rising interest rates, most notably housing. Inflation does not appear to be accelerating but remains well above the target levels set by the Fed. Consumer spending has remained robust, but as inflation continues to undermine household wage gains and erode the savings stockpiles accumulated during the pandemic, spending is likely to slow going forward. The Massachusetts economy may be more vulnerable than that of the U.S. for reasons discussed below.

Inflation, consumer spending, and interest rates have affected sectors of the economy differently. Rising mortgage rates have dramatically slowed transactions in the housing market and consumer spending on household goods like furniture and appliances that are associated with home buying and new household formation.

At the same time, consumer spending on services such as travel, leisure, and hospitality has increased robustly. Through August, real U.S. consumer spending was still rising, with increases in services more than offsetting declines in real goods spending. In Massachusetts, nominal spending on goods subject to the state sales tax and motor vehicle tax fell in the third quarter at a 5.1 percent annual rate, but this followed very sharp growth in the second quarter. Relative to the third quarter of 2021, such spending in Massachusetts was up 7.8 percent in the third quarter of 2022, outstripping inflation.

“Technology, banking, and finance have been hurt by rising interest rates and asset value declines,” noted Alan Clayton-Matthews, Senior Contributing Editor and Professor Emeritus of Economics and Public Policy at Northeastern University, who compiles and analyzes the Current and Leading Indexes for MassBenchmarks.

“With a concentration in information technology and biotechnology, Massachusetts is especially vulnerable to the effects of higher interest rates on the supply of venture capital and private investment. Several tech companies have announced hiring slowdowns, pauses, or layoffs and the tech-heavy NASDAQ and Massachusetts Bloomberg stock indexes have both performed significantly worse than the S&P 500 and the Dow Jones indexes,” Clayton-Matthews added.

While these projections are speculative and based on a limited set of leading economic indicators, given the Commonwealth’s older demographic profile (holding back labor force growth) and its exposure in the interest-sensitive technology sector, the risks to the state’s economic outlook are decidedly skewed to the downside.