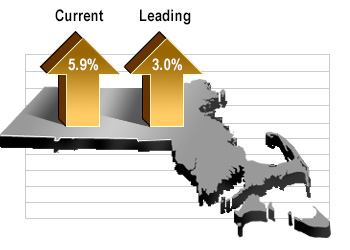 Massachusetts real gross domestic product grew 5.9 percent in the third quarter of 2017 according to the MassBenchmarks Current Economic Index, released today by MassBenchmarks, the journal of the Massachusetts economy published by the UMass Donahue Institute in collaboration with the Federal Reserve Bank of Boston. Nationally, real gross domestic product grew at a 3.0 percent annualized rate during the same period according to the U.S. Bureau of Economic Analysis (BEA).

Based on the latest available data, MassBenchmarks now estimates that the state economy grew at a 4.9 percent pace, versus 3.1 percent nationally during the second quarter of 2017. In the first quarter the BEA estimates that Massachusetts grew at a 1.1 percent rate as compared to 1.2 percent for the U.S.

The Commonwealth exhibited very strong employment and earnings growth during the third quarter, while U.S. employment and earnings growth was restrained by the impact of Hurricane Harvey and Hurricane Irma, both of which significantly disrupted economic activity in Texas, Florida and, to a lesser extent, nationwide. Payroll employment grew at a 2.1 percent annual rate in Massachusetts in the third quarter as compared to 1.2 percent nationally. Wage and salary income in Massachusetts, as estimated from state withholding tax revenues, grew at a very robust 10.5 percent annual rate, while MassBenchmarks projects a 3.8 percent growth for wage and salary income for the nation during the same period. The BEA will release its estimate of national wage and salary income growth on Monday.

Year over year, the state and the nation's job growth were roughly on par, with employment growing 1.5 percent in Massachusetts between the third quarter of 2016 and the third quarter of 2017 as compared to 1.4 percent growth nationally during the same period. Wage and salary income grew 5.8 percent year over year in the Bay State, significantly stronger than the estimated 2.7 percent growth for the nation.

"Labor markets appear to be nearly back to full employment levels," noted Alan Clayton-Matthews, MassBenchmarks Senior Contributing Editor and Associate Professor of Economics and Public Policy at Northeastern University, who compiles and analyzes the Current and Leading Indexes. The unemployment rate in Massachusetts in September was 3.9 percent as compared to 4.2 percent nationally. The broader U-6 measure of unemployment was 7.6 percent in Massachusetts versus 8.3 percent for the U.S.

"Despite these low unemployment rates and anecdotes about a shortage of workers, employment growth continues unabated without clear signs of wage rate pressures. It may be that the rapid growth in wage and salary income in Massachusetts is signaling the beginning of an acceleration in wage rates, but it's too early to tell. Tax revenues can fluctuate from quarter to quarter for a variety of reasons that do not reflect an underlying trend," Clayton-Matthews added.

As measured by regular sales tax receipts and motor vehicle sales taxes, spending in the state has been surprisingly weak given strong income growth and the surging stock market. Spending on taxable items declined in the third quarter by 3.3 percent, although that decline was the result of what could simply be a short-run decline or temporary pause in automobile sales. Year over year, this spending grew by a relatively paltry 1.7 percent between the third quarter of 2016 and the third quarter of 2017.

The MassBenchmarks Leading Economic Index shows that the state's economy is expected to continue to grow at a moderately robust pace. The leading index is a forecast of the growth in the current index over the next six months, expressed at an annual rate. Thus, it indicates that the economy is expected to grow at an annualized rate of 3.3 percent in the fourth quarter of 2017 and 3.0 percent in the first quarter of 2018.