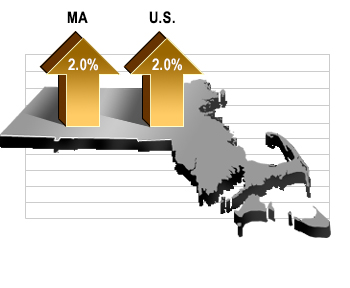 The slowdown in the pace of growth from the second to third quarter is the result of the Delta variant of COVID-19 restraining the pace of reopening, associated ongoing supply chain disruptions and labor shortages, and less exuberant consumer spending on goods, especially durable goods. Much of the growth that did occur was driven by increased consumer spending and associated job growth in the leisure and hospitality, as well as other services sectors. Inflation diminished the impact of this consumer spending on real output and by extension real GDP growth.

The unemployment rate in Massachusetts rose during the third quarter, from 4.9 percent in June to 5.2 percent in September. At the same time, it fell in the U.S., from 5.9 percent in June to 4.8 percent in September. "While the rise in the unemployment rate in Massachusetts may reflect persons returning to the work force, participation rates are still well below pre-pandemic levels and the number of unemployed in the state, at 193,000 in September is still well above its pre-pandemic levels of 105,000 in February of 2020," noted Alan Clayton-Matthews, MassBenchmarks' Senior Contributing Editor and Professor Emeritus of Economics and Public Policy at Northeastern University, who compiles and analyzes the Current and Leading Indexes.

"One encouraging sign is that the number of persons who are working part time but who want full-time work has returned to pre-pandemic levels. However, labor market conditions are still far from normal. In February 2020, the state's unemployment rate was 2.8 percent or just over half of the September 2021 rate," Clayton-Matthews added.

In the fourth quarter of this year and first quarter of next year, MassBenchmarks expects the state economy to expand at a 4.5 percent annual rate, consistent with continued gradual progress in getting back to normal and assuming there is no seasonal COVID-19 surge as temperatures drop. This reflects a dampening of the optimism that was present earlier this summer. The AIM Business Confidence Index fell in both August and September, and the Conference Board's Consumer Confidence Index for the U.S. declined throughout the third quarter. However, both indexes are at levels that indicate a continuation of moderate growth.