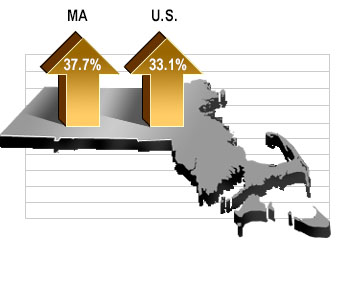 In the third quarter of 2020, Massachusetts real gross domestic product (GDP) increased at a 37.7 percent annualized rate of growth, according to MassBenchmarks, while U.S. GDP grew at a 33.1 percent rate according to the U.S. Bureau of Economic Analysis (BEA). According to the BEA, in the second quarter, Massachusetts GDP decreased at a 31.6 percent rate while the U.S. GDP declined at a 31.4 percent rate. While the annualized growth rate in Q3 exceeded the rate of decline in Q2, we estimate that in Q3, gross state product in Massachusetts remained 2.6 percent below its 2019Q4 peak through September.

The record pace of growth in output in the third quarter following the record fall in output in the second quarter reflects the impact of the widespread shutdown of the state economy in the Spring, followed by its phased reopening during the Summer months. Economic activity in Massachusetts peaked in February and hit bottom in April. Economic growth surged in May and through July. While growth continued in August and September, the pace of growth has slowed in recent months. The pattern in Massachusetts and nationally was similar. However, Massachusetts' decline was initially steeper due to a more comprehensive shutdown that was imposed earlier and relaxed more slowly than other states and regions.

"Aggregate payroll incomes in the third quarter were down less than employment because job losses – although widespread – have been concentrated in lower-paying sectors, especially in leisure, hospitality and other services," noted Alan Clayton-Matthews, MassBenchmarks Senior Contributing Editor and Professor Emeritus of Economics and Public Policy at Northeastern University, who compiles and analyzes the Current and Leading Indexes. "These sectors include entertainment, hotels, restaurants, barbershops, gyms, and other personal services that require close personal contact or travel," Clayton-Matthews added.

The strong growth in the third quarter was aided largely by federal fiscal and monetary policy, especially the CARES act, which offered generous income supports through sizable enhancements to unemployment insurance income and grants and loans to businesses to remain open and reemploy workers. By keeping financial markets functioning and interest rates low, monetary policy has supported business liquidity and household wealth. Nationally, spending on goods (but not services) has rebounded and surpassed pre-pandemic levels. In Massachusetts, spending on items subject to the state's regular sales or automobile sales taxes rebounded sharply in the third quarter, growing at an 86.0 percent annual rate after falling at a 37.9 percent annual rate in the second quarter. Spending on these taxable items in the third quarter was up 7.0 percent year over year.

Fourth quarter growth is expected to slow sharply from the third quarter, reflecting the waning influence of the fiscal support from the CARES Act. The Wall Street Journal survey of economists' average expectation for fourth-quarter U.S. GDP growth was 3.8 percent in their October survey. Recently, monthly job growth rates have been decelerating. U.S. industrial production stalled in August and September. In Massachusetts, the MassBenchmarks Current Economic Index slowed substantially in September, reflecting slower growth rates in employment, withholding, and sales taxes. Initial unemployment claims remain stubbornly elevated and rose in Massachusetts during September. While continuing claims in the regular unemployment program continue to fall both in Massachusetts and the U.S., Pandemic Emergency Unemployment Compensation (PEUC) claims for people who have exhausted regular claims are rising steadily as long-term unemployment increases. Increasing rates of COVID-19 infections, both locally and across the U.S. and world, may further slow the pace of reopening during this Fall and Winter. For the remainder of the year, the uncertainty in the economic outlook is decidedly weighted towards the downside.