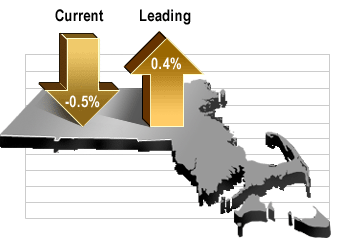 Massachusetts real gross domestic product declined at an estimated annual rate of 0.5 percent in the first quarter of 2017 according to the MassBenchmarks Current Economic Index, released today by MassBenchmarks, the journal of the Massachusetts economy published by the UMass Donahue Institute in collaboration with the Federal Reserve Bank of Boston. U.S. real gross domestic product grew at an annual rate of 0.7 percent during the same period, according to the advance estimate of the U.S. Bureau of Economic Analysis.

Based on the latest available data, MassBenchmarks now estimates that the state grew at a 1.2 percent annual rate in the fourth quarter of 2016, as compared to 2.1 percent nationally. This is the second consecutive quarter in which state economic growth has lagged that of the nation. The BEA estimates that Massachusetts growth also fell short of U.S. growth in the first quarter of 2016. They estimate that the state economy contracted at a 1.9 percent annual rate while the national economy grew at 0.8 percent annual rate during the same period. The BEA estimates that state growth exceeded that of the U.S. in the second and third quarters of 2016, expanding at a 1.7 percent and 3.8 percent rate respectively, as compared to national growth rates of 1.4 percent and 3.5 percent.

"The labor market in Massachusetts — and the nation — appears to continue to strengthen despite the rise in the state's unemployment rate from 3.1 percent in December 2016 to 3.6 percent in March," noted Alan Clayton-Matthews, MassBenchmarks Senior Contributing Editor and Associate Professor of Economics and Public Policy at Northeastern University, who compiles and analyzes the Current and Leading Indexes. "The rise appears to be due to more people entering or re-entering the labor force, confident that they will find jobs," Clayton-Matthews added.

The broader U-6 unemployment rate, which counts as unemployed those who are working part-time but want full-time work and those who want to work but have not looked for work in the last four weeks, stood at 7.4 percent in March in Massachusetts1 as compared to 8.9 percent nationally. These rates are down from 8.7 percent and 9.8 for Massachusetts and the U.S. respectively from March of 2016. The pre-recession low for the U-6 in Massachusetts was 7.1 percent in September 2007.

Consumer and business spending on items subject to the state regular sales and motor vehicle sales taxes continue to increase, rising at a 2.1 percent annual rate in the first quarter, following a strong 10.3 percent pace of growth in the final quarter of last year. This measure of Massachusetts spending is up 4.2 percent over the first quarter of 2016. Consistent with national trends, there was weakness in spending on automobiles. The motor vehicle portion of this measure declined at an 11.7 percent rate in the first quarter, while the regular sales portion increased 5.0 percent.

While state economic growth in the first quarter was surprisingly weak, this likely reflects constraints on growth due to a looming shortage of workers rather than a lack of confidence or weakness in aggregate demand or consumer and business spending. Both consumer confidence and business confidence remain at high levels. In March, state business confidence as reported by the Associated Industries of Massachusetts recorded its highest reading since August 2004, following seven straight months of increases. MassInsight's consumer confidence index for January is approaching levels not seen since the height of the boom of the late 1990's.

The MassBenchmarks Leading Index predicts that the state economy will continue to grow at a subdued pace over the next six months, at a 0.5 percent annual rate of growth in the second quarter and 0.4 percent in the third quarter of 2017. This is well below expectations of only of a few months ago, and is mainly the result of recent disappointing wage and salary income growth, and sluggish productivity growth at both the state and national level. To date the reason for weak growth in wage and salary income remains a puzzle. It may be a reflection of a poor "bonus season" and could bounce back next quarter. Nevertheless, over the medium term, the state is facing looming constraints on growth as a result of a shortage of available skilled workers. The labor force challenge does not appear likely to change anytime soon.

The 10 indicators that comprise the leading index usually do not all move in tandem. Typically, some may indicate an expectation of faster than average growth, while at the same time others may indicate an expectation of slower than average growth. The following table accounts for the contributions of each towards faster or slower growth than the recent underlying trend of 0.4 percent. The index value is their sum.

1.) The U.S. Bureau of Labor Statistics does not release the U-6 monthly at the state level. MassBenchmarks obtains monthly estimates directly from the Current Population Survey. The figures reported here are seasonally-adjusted and smoothed to make them comparable to the monthly U.S. rates.

All of the indicators except interest rates refer to Massachusetts. The current index is composed of four indicators: nonagricultural employment, withholding taxes, sales taxes, and the unemployment rate. The leading index includes these four current indicators plus the other six (leading) indicators in the contributions table. All the indicators are as of March, except for interest rates and the Bloomberg stock index for Massachusetts, which are through April 21. The MassInsight Consumer Confidence Index is released every third month. Intervening months are interpolated, and changes in the Conference Board's Consumer Confidence Index for the U.S. are used to extrapolate to the current month of the index, as needed. Series measured in current dollars or values, i.e., withholding taxes, sales taxes, the Bloomberg stock index, and motor vehicle sales taxes, are deflated by the U.S. consumer price index for all urban consumers, excluding food and energy.

For a description of the methodology used to construct these indices, see: Alan Clayton-Matthews and James H. Stock, "An application of the Stock/Watson index methodology to the Massachusetts economy," Journal of Economic and Social Measurement, vol. 25 (1998/1999), pp. 183-233.