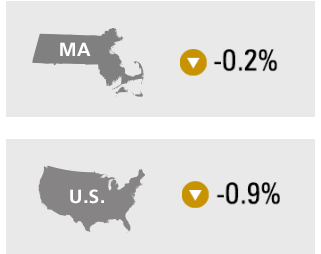 In the second quarter of 2022, Massachusetts real gross domestic product decreased at a 0.2 percent annualized rate, according to MassBenchmarks, while U.S. GDP decreased at a 0.9 percent rate according to the U.S. Bureau of Economic Analysis (BEA). In the first quarter of this year, according to the BEA, Massachusetts GDP grew at an annual rate of 0.2 percent while U.S. GDP declined at an annual rate of 1.6 percent.

“Economic growth in both the U.S. and Massachusetts slowed very significantly in the first half of this year despite a strong labor market with good employment gains, a low unemployment rate and a surplus of job openings,” noted Alan Clayton-Matthews, Senior Contributing Editor and Professor Emeritus of Economics and Public Policy at Northeastern University, who compiles and analyzes the Current and Leading Indexes for MassBenchmarks.

According to Clayton-Matthews, the apparent paradox described above can be explained by several conditions that are shared by both the nation and the state that have resulted in lower productivity per worker. First, job growth has been concentrated in relatively lower paid sectors, such as leisure and hospitality, that tend to employ lower-skilled workers. Second, as a response to the scarcity of labor in high demand fields, employers have been “labor hoarding” or holding on to workers despite slowdowns in demand and lower utilization of employees. As a third factor, COVID-19 has increased absences from work, whether for illness or care of a sick family member.

Inflation is also playing a role. Per-worker wages and salaries are not keeping up with inflation, and on average are falling in real terms. Total personal incomes, though rising, are just barely keeping up with inflation. This limits real consumer spending, which accounts for approximately two-thirds of all economic activity. Finally, rising interest rates are slowing the economy, reducing the demand for residential construction, and lowering asset prices, with predictable indirect effects on consumer and business confidence which can be expected to dampen current and future spending.

Payroll employment in Massachusetts in the second quarter grew at an annual rate of 3.6 percent, roughly the same as the 3.4 percent pace for the U.S. This compares with job growth of 5.2 percent in the first quarter in Massachusetts and 4.7 percent for the U.S. Year over year – Q2 2021 to Q2 2022 – job growth increased by 4.9 percent in Massachusetts and 4.4 percent in the U.S. Despite this relatively robust pace of job growth, in June state payroll employment remained 2.0 percent below the pre-pandemic peak in February 2020. The equivalent gap in the U.S. has virtually disappeared, in June the nation was only 0.3 percent below its pre-pandemic peak.

The unemployment rate in Massachusetts fell to 3.7 percent in June, down from 4.3 percent in March. During this same period, the U.S. unemployment rate held steady at 3.6 percent. In June, the labor force participation rate for Massachusetts was 66.0 percent, unchanged since March and a notch above that of February 2020 (65.9 percent). The U.S. labor force participation rate in June was 62.2 percent, 1.2 percentage points below pre-pandemic levels (February 2020). The broader U-6 unemployment measure in June was 5.6 percent for Massachusetts and 6.7 percent for the U.S. In Massachusetts in June, the number of persons who want full time work but are working part time, and the number of workers who are only marginally attached to the workforce have returned to pre-pandemic levels.

Although wage and salary income per worker has been growing briskly over the past year – 6.0 percent in Massachusetts and 6.8 percent in the U.S. from Q2 2021 through Q2 2022 – these incomes have not kept up with inflation. The Bureau of Labor Statistics’ measure of CPI inflation was 7.5 percent in the Boston Metropolitan Area and 8.6 percent in the U.S. from the second quarter of last year (the Boston measure was May 2021 to May 2022 – the survey is every other month in Boston). Thus, despite robust wage growth, real wage and salary income per worker in Q2 2022 was less than it was in Q1 2022.