Q2 2020 was the worst quarter on record, UMass journal reports 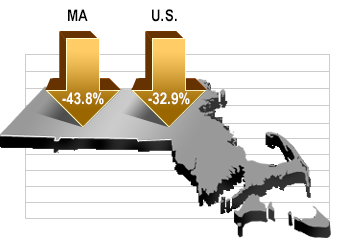 In the second quarter of 2020, based on the best information available today, Massachusetts real gross domestic product (GDP) declined at an annualized rate of 43.8 percent according to MassBenchmarks, while U.S. real gross domestic product declined by 32.9 percent during the same period according to the U.S. Bureau of Economic Analysis (BEA). In the first quarter of 2020, the BEA estimates that the Massachusetts and U.S. economies declined by 5.1 percent and 5.0 percent respectively on an annualized basis.

These historic second quarter declines reflect the impact of COVID-19 shutdowns of economic activity, particularly in leisure and hospitality, personal services, construction, retail and wholesale trade, healthcare, education, and manufacturing. This was the steepest quarterly decline in economic activity for both the state and the nation on record. As the economy began to slowly reopen in April, growth reversed course sharply in a positive direction, so the second quarter results reflect both the sharp drop from the peak in February and the climb from a very deep trough in April.

Massachusetts, along with several other states in the Northeast, was hit harder by COVID-19 before the country as a whole, was shut down earlier and more completely than most other states and began to reopen later and more slowly than most states. This makes it unsurprising that the pace of the economic decline in Massachusetts was greater than it was nationally in the second quarter of 2020.

"As the economy continues to reopen, third quarter growth should be sharply higher", noted Alan Clayton-Matthews, MassBenchmarks Senior Contributing Editor and Professor Emeritus of Economics and Public Policy at Northeastern University, who compiles and analyzes the Current and Leading Indexes. "Given that Massachusetts started opening up later than most other states and is having success limiting the spread of COVID-19 thus far, there is the very real possibility that state performance in the third quarter will outpace that of the nation," Clayton-Matthews added. Nevertheless, employment and economic activity are not expected to return to their peak levels (February) anytime soon.

State economic indicators for May and June are markedly more encouraging than they were in March and April. After losing 690,500 jobs in March and April, an estimated 138,700 were added in May and June. Initial unemployment claims have fallen steadily from 409,000 in March to 144,000 in June. The U-6 unemployment rate fell from 26.4 percent in April to 21.2 percent in June, suggesting more part-time workers are finding full-time work. Spending on items subject to the Massachusetts regular sales and motor vehicle sales taxes also began to rise sharply in May.

The outlook for the fourth quarter is considerably more uncertain. For Massachusetts as well as the nation, the pace of the recovery and length of time the economy is operating below capacity will depend on the course of COVID-19, the efficacy of public health policies designed to prevent its spread, the cooperation of the public and their adherence to public health guidelines, and success in finding and distributing safe vaccine(s) and effective treatments for the virus.