Surge in wage and salary growth accounts for strong performance. 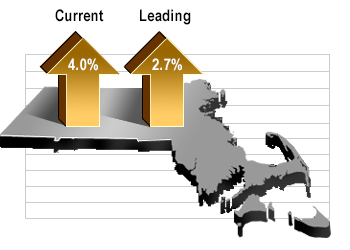 Massachusetts real gross domestic product grew 4.0 percent in the second quarter of 2017 according to the MassBenchmarks Current Economic Index, released today by MassBenchmarks, the journal of the Massachusetts economy published by the UMass Donahue Institute in collaboration with the Federal Reserve Bank of Boston. U.S. real gross domestic product grew 2.6 percent during the same period, according to the U.S. Bureau of Economic Analysis (BEA).

The broader U-6 unemployment rate, which counts as unemployed those who are working part-time but want full-time work and those who want to work but have not looked for work in the last four weeks, followed a similar pattern. In Massachusetts, the U-6 rate rose from 7.5 percent in December to 7.8 percent in June, while for the U.S. it fell from 9.2 percent in December to 8.6 percent in June. Again, the increase in the U-6 for Massachusetts is not the result of an increase in involuntary part-time workers or an increase in those marginally-attached to the labor force; rather it reflects the rapid increase in persons rejoining or entering the labor force for the first time.

Consumer and business spending on items subject to the state regular sales and motor vehicle sales taxes declined slightly, by a 1.4 percent annual rate, in the second quarter after rising at a 9.3 percent rate in the first quarter. Sales tax eligible spending was 2.9 percent higher in the second quarter of this year than in the second quarter of last year. The dip in the first quarter reflects typical quarterly volatility in this measure rather than clear evidence of a retrenchment in consumer spending. Consumer spending appears to continue to grow at a moderate pace, consistent with moderate increases in consumer confidence.

The MassBenchmarks Leading Index suggests that the state's economy will continue to grow at a moderately strong pace — a 2.7 percent annual rate — for the final six months of 2017. This pace of growth is sustainable provided skilled job seekers continue to be available to support the expansion of the Commonwealth's growing employers. Labor supply can be expected to increasingly become a constraint on state economic growth as the Massachusetts economy contends with the demographic constraints of an aging workforce.

For a full breakdown of the latest indexes, click here. A comprehensive analysis of the state of the Massachusetts economy can be found in the most recent issue of MassBenchmarks.