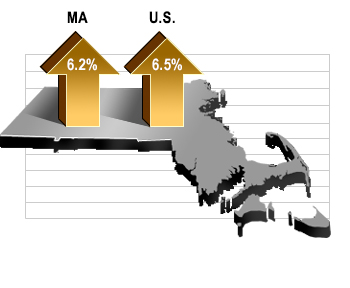 “This strong economic performance in both the state and the nation reflects the strong demand spurred by the American Rescue Plan, both for spending by consumers and hiring by employers, an expansionary monetary policy, and the opening of the economy aided by vaccinations,” noted Alan Clayton-Matthews, MassBenchmarks’ Senior Contributing Editor and Professor Emeritus of Economics and Public Policy at Northeastern University, who compiles and analyzes the Current and Leading Indexes. “Economic growth is expected to remain strong in the second half of the year, but there is a risk that rising COVID-19 Delta variant cases could slow the recovery,” Clayton-Matthews added.

Massachusetts wage and salary income in the second quarter, estimated from state withholding taxes net of unemployment insurance withholding, grew at a 2.8 percent annual rate from the same measure in the first quarter. This understates the strength of workers’ earnings in the second quarter because the comparison in the first quarter was almost certainly boosted by a strong bonus season in the financial sector.

The U-6 unemployment rate in June – which includes persons working part-time but who want full-time work and persons who want work but have not looked for work in the last four weeks (the “marginally attached workforce”) – was 8.9 percent in Massachusetts and 9.8 percent in the U.S. These two components of underemployment have fallen sharply in recent months in Massachusetts and are near pre-pandemic levels.

Economic growth is expected to remain strong in the second half of the year. The Massachusetts leading index is projecting state GDP growth of 4.7 percent in the third quarter and 8.1 percent in the fourth quarter. These projections do not take into account the recent uptick in COVID-19 cases related to the Delta variant or the worrying trend of slower vaccination uptake, which threaten the continued rise in consumer spending and employment across the national economy. Another constraint on sustained strong economic growth is the shortage of workers. Nationally the growth in the working-age population has slowed, and in Massachusetts the working age population has been declining since the fall of last year according to the U.S. Bureau of Labor Statistics.