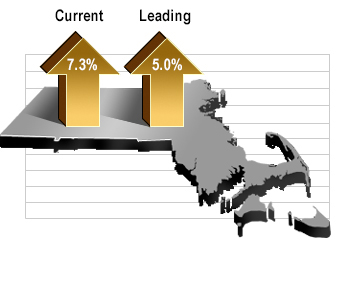 The Massachusetts economy accelerated sharply in the second quarter, bucking the expectation of slower growth due to low unemployment and demographic constraints. Data from the U.S. Bureau of Labor Statistics (BLS) survey of employers and recent trends in state tax revenues indicate that the recent surge in state economic growth reflects strong gains in employment, earnings, and consumer and business spending.

The broader U-6 measure of unemployment in Massachusetts has changed little over the past year. The U-6 measure includes a count of the number of persons who are part-time for "economic reasons," meaning that they prefer full-time work. In June, the U-6 was 7.5 percent, about the same as June 2017, when it was 7.4 percent. The number of workers who are working part-time but want a full-time job stands at about 100,000, which is about 30,000 above the pre-recession level of 70,000 in 2007. The U.S. U-6 rate of unemployment in June was 7.8 percent, down from 8.5 percent a year earlier.

"Low unemployment rates and strong demand for labor and housing may finally be lifting wage rates," noted Alan Clayton-Matthews, MassBenchmarks Senior Contributing Editor and Associate Professor of Economics and Public Policy at Northeastern University, who compiles and analyzes the Current and Leading Indexes. "They are also leading to increases in the cost of living, particularly for housing," Clayton-Matthews added. While the overall consumer price index for the Boston area (All Urban Consumers CPI, BLS) rose 3.2 percent in the year ending in May, the housing component was up 4.5 percent and the rent component was up 5.6 percent during the same period.

The MassBenchmarks Leading Economic Index is predicting that the state economy will grow at a 5.3 percent rate in the third quarter and a 5.0 percent rate in the fourth quarter of this year. Since the statistical model used to calculate the Leading Index does not consider demographic projections of population and labor force growth, there is real reason to believe the Massachusetts economy will not be able to sustain this pace of growth, even for the remainder of 2018.

However, recent history suggests that it may well be possible to continue the rapid expansion, at least in the near-term. While overall Massachusetts job growth in the last 12 months (from June 2017 to June 2018) was 1.7 percent, employers in technology and knowledge-based sectors were able to expand their payrolls at a faster pace. For example, employment in the professional, scientific, and technical services sector grew 5.8 percent; in software, employment grew 3.2 percent, and construction added 7.3 percent to its job count during the same period.

It is likely that many of these new jobs were filled by workers who either migrated to the state or remained in the state after moving here to go to college. The incomes generated by these relatively well-paid jobs can be expected to boost demand for jobs in all sectors, many of them in more moderately-paid or lower-paid service roles. The capacity of Massachusetts to provide all of these new workers with adequate housing and transportation options is a major concern, and will continue to weigh heavily on the Commonwealth's ability to attract and retain the workforce it will need to sustain its economic expansion.

---------
MassBenchmarks is published by the University of Massachusetts Donahue Institute in cooperation with the Federal Reserve Bank of Boston. The Donahue Institute is the public service, outreach, and economic development unit of the University of Massachusetts Office of the President. The Current and Leading Indexes are compiled and analyzed by Dr. Alan Clayton-Matthews, Associate Professor of Economics and Public Policy at Northeastern University and are released quarterly by MassBenchmarks.