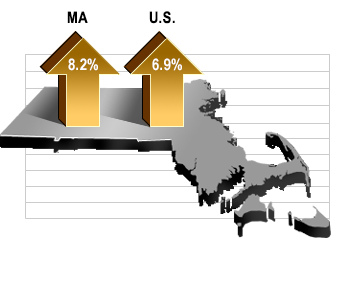 The strong growth in the fourth quarter reflects in part the respite from COVID infections in the fall. The Delta variant contributed to slower growth in the third quarter, and the Omicron variant began to affect the economy only towards the end of the fourth quarter. Otherwise, the fourth quarter of 2021 was a period of strong employment, income growth, and robust consumer spending, with somewhat stronger performance in Massachusetts than nationally.

Payroll employment in the fourth quarter grew at an annual rate of 6.1 percent in Massachusetts, considerably faster than the 3.6 percent pace for the U.S. This compares with jobs growth of 7.0 percent in Massachusetts and 6.7 percent for the U.S. in the third quarter. Year over year, between the fourth quarters of 2020 and 2021, the number of jobs in Massachusetts grew 6.1 percent, as compared to 4.3 percent for the U.S. Despite this robust growth, the number of jobs in the state remained 4.1 percent below the levels of payroll employment at the pre-pandemic peak (February 2020) at the conclusion of calendar year 2021. The national jobs gap remains 2.3 percent below the February 2020 peak.

Spending on goods subject to the regular state sales taxes and motor vehicle sales taxes rose at a 13.5 percent annual rate in the fourth quarter, after declining by 12.9 percent in the third quarter, a robust pace of spending growth by Massachusetts residents and businesses in the final three months of the year.

In the first half of 2022, the MassBenchmarks Leading Index suggests a moderate slowing in Massachusetts GDP growth from the strong pace of the fourth quarter, but still consistent with continuing economic recovery. The Leading Index is projecting growth of 5.6 percent in the first quarter of this year and 4.6 percent in the second quarter. However, downside risks remain evident. Unease about the future is reflected in weaker consumer confidence and falling stock prices, which in turn reflect concerns about the effect of the virus on the economy, concerns about persistent inflation, and international unrest.