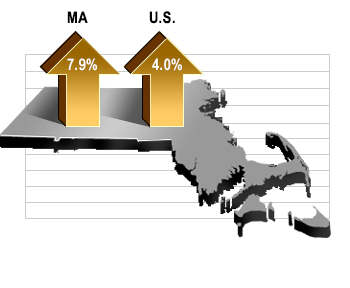 In the fourth quarter of 2020, the Massachusetts real gross domestic product (GDP) increased at a 7.9 percent annualized rate of growth, according to MassBenchmarks, while the U.S. GDP increased at a 4.0 percent rate according to the U.S. Bureau of Economic Analysis (BEA). In the third quarter, both the nation and the state expanded at the fastest pace on record with Massachusetts GDP increasing at a 33.1 percent rate and U.S. GDP growing at a 33.4 percent rate.

The sharp slowdown in the pace of growth from the third quarter was expected and reflects a transition from the period of very strong growth associated with the reopening of much of the economy during the summer and which more recently has slowed to a more restrained pace as winter approached and the COVID-19 virus returned with a vengeance. Another factor limiting growth in the fourth quarter was the reduction in income, including unemployment compensation, associated with the waning effects of the CARES Act and related stimulus programs. The quarter ended with state economic growth stalling in December in the midst of a virulent resurgence of COVID cases. Payroll employment declined at both the national and the state level in December, while joblessness rose in Massachusetts and held steady nationwide.

During the fourth quarter of 2020, the Massachusetts economy fared better than the U.S. in terms of GDP, employment, and wage and salary income growth.

Massachusetts wage and salary growth in the fourth quarter was very strong, expanding at a 26.1 percent annual rate. This estimate is based on state withholding taxes and excludes unemployment insurance withholdings. Nationally, wages and salaries grew at an 8.9 percent annual rate in Q4. The strong showing for Massachusetts may reflect in part a good bonus season. The S&P stock index finished 2020 up 16.3 percent year over year.

Wage and salary income in the fourth quarter exceeded that of the fourth quarter of 2019, by 2.2 percent in Massachusetts and 2.0 percent in the U.S. "The stark contrast between the return of payroll income to pre-pandemic levels and the lack of a commensurate return of employment to pre-pandemic levels reflects the inequality of the economic impact of the pandemic on different industrial sectors and workers," noted Alan Clayton-Matthews, MassBenchmarks Senior Contributing Editor and Professor Emeritus of Economics and Public Policy at Northeastern University, who compiles and analyzes the Current and Leading Indexes. "Low-wage sectors such as leisure and hospitality and personal services were hit the hardest in the shutdown and remain the sectors experiencing the slowest employment recovery," Clayton-Matthews added.

The labor market is weaker than the unemployment rates suggest, since people who drop out of the labor force because they cannot find work or have to stay at home are not counted as unemployed in the headline unemployment rate. The labor force in Massachusetts in December remained 175,800 below December 2019 levels, reflecting a drop in labor force participation of 3.4 percentage points. Labor force participation rates for the U.S. dropped 1.7 percentage points during the same period.

Consumer spending in Massachusetts remained strong in the fourth quarter. As estimated by state regular and motor vehicle sales taxes, spending on these taxable items was up 6.8 percent on an annualized basis in the fourth quarter. In the third quarter, such spending expanded by an annualized rate of 85.6 percent. Year over year this spending was up 6.4 percent. The rebound in spending on goods to above pre-pandemic levels is consistent with robust wage and salary growth, the wealth effect associated with the performance of the stock market, and the benefits of income support provided by federal stimulus programs. At the same time, state meals tax revenues suggest a substantial slowdown in restaurant spending year over year, reflecting pandemic shutdowns and consumers' safety concerns.

The slowdown in growth at the end of the fourth quarter is expected to continue into the first quarter of 2021 as COVID case levels are expected to remain high, the cold weather limits safer outside activity, and the lifting of restrictions on business activity is delayed or slowed more than previously hoped. The federal stimulus passed in late December will help offset this slowdown somewhat in the first quarter. The expected cumulative increase in the vaccinated population during the winter and spring should allow a gradual and steady reopening of the economy. For these reasons, the average estimate of U.S. GDP growth in the first and second quarters of this year from the Wall Street Journal survey of economists is 2.2 percent in the first quarter and 4.9 percent in the second quarter. The outlook for Massachusetts is similar, assuming a steady rise in vaccinations and an associated decline in the prevalence and impact of the ongoing COVID-19 pandemic.