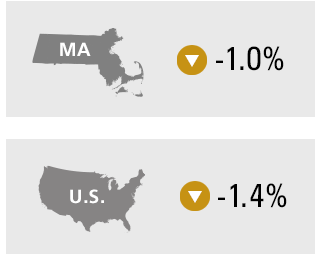 The sharp slowdown in growth in the first quarter reflects the impact of the Omicron variant of COVID-19, continued supply chain woes, the eroding effect of inflation on purchasing power, and weakening consumer and investor confidence. As the growth-dampening effect of Omicron waned in late winter and early spring, the outbreak of war in Ukraine gave an added boost to inflation, particularly for energy and food prices. At the same time, the labor market continued to exhibit strong gains in employment and wage growth, declining unemployment, and record low levels of unemployment claims. Wage and salary growth per worker, however, continued to lag inflation, reducing aggregate spending power and in turn slowing inflation-controlled, or “real,” economic activity.

Massachusetts payroll employment in the first quarter grew at an annual rate of 5.2 percent, slightly faster than the 4.8 percent pace for the U.S. This compares with job growth of 4.2 percent in Massachusetts and 4.9 percent for the U.S. in the fourth quarter of last year. Between Q1 2021 and Q1 2022 employment increased by 5.3 percent in Massachusetts and 4.6 percent in the U.S. However, in March 2022, the state remained 2.4 percent below pre-pandemic payroll employment levels, which peaked in February 2020. The equivalent “jobs gap” nationally as of March 2022 was smaller, at just 1.0 percent.

“There is little slack left in the labor market,” noted Alan Clayton-Matthews, Senior Contributing Editor and Professor Emeritus of Economics and Public Policy at Northeastern University, who compiles and analyzes the Current and Leading Indexes for MassBenchmarks. The U.S. labor force participation rate in March, at 62.4 percent, was one percentage point below the pre-pandemic peak of February 2020. The Massachusetts labor force participation rate in March, at 66.0 percent, is a notch above that of February 2020 (65.9%). “Job openings continue to far exceed the number of unemployed, and historically low initial unemployment claims in both the state and the nation reflect the desire of employers to avoid shrinking staffing levels,” Clayton-Matthews added.

The surge in overall inflation in part reflects the sharp increase in energy prices, but core prices that exclude food and energy also accelerated rapidly in the first quarter of 2022, with reported core inflation of 8.1 percent in the Boston metropolitan area and 6.5 percent nationally. Inflation erodes the real purchasing power of nominal income, which in turn can slow real consumer spending and therefore economic growth.

The outlook for the second and third quarters of 2022 calls for slow growth, but the level of uncertainty is high. Although the labor market is strong, consumer and investor confidence are weakening, as reflected in the Conference Board’s consumer confidence index and declines in stock market indexes. The Federal Reserve has begun to raise interest rates in a bid to tamp down inflation while still avoiding a recession, a tricky process that has led to a growing pessimism in the forecasting community. A Wall Street Journal poll of leading economic prognosticators in April puts the probability of a recession in the next 12 months at 28 percent, up significantly from 18 percent in January.