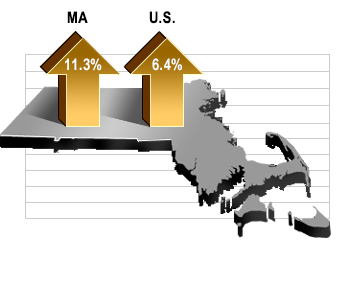 "Economic growth in both the state and the nation in the first quarter exceeded expectations for two reasons," noted Alan Clayton-Matthews, MassBenchmarks Senior Contributing Editor and Professor Emeritus of Economics and Public Policy at Northeastern University, who compiles and analyzes the Current and Leading Indexes. "The first is due to the sheer size of the recent federal coronavirus relief package which had an immediate effect on household income and consumer expectations and the second was the faster than expected distribution of COVID-19 vaccines," Clayton-Matthews added. The Commonwealth is well positioned for a stronger rebound than the nation in part because its shutdown last year at this time was broader and accompanied by larger employment losses than in most states. That potential was partly realized in the first quarter when Massachusetts experienced stronger employment and earnings growth and a faster fall in unemployment rates than the U.S.

Aggregate wage and salary growth in Massachusetts during the first quarter was very strong, expanding at a 25.7 percent annual rate. This estimate is based on state withholding taxes net of unemployment insurance withholding. The corresponding estimate for the U.S. estimates national wage and salary growth of 6.6 percent. The strong showing in Massachusetts may in part reflect a good bonus season. The S&P stock index finished 2020 16.3 percent larger than it started.

Wage and salary income in the first quarter exceeded that of the first quarter 2020 by 6.5 percent in Massachusetts and 1.8 percent in the U.S. The contrast between the return of workers' income to pre-pandemic levels while employment continues to recover is the result of job losses. Low-wage sectors such as leisure and hospitality and personal services were hit the hardest in the shutdown and remain the sectors furthest from their pre-pandemic employment levels.

The U-6 unemployment rate in March — which includes persons working part-time but who want full-time work and persons who want work but have not looked for work in the last four weeks (the marginally attached) — was 9.4 percent in Massachusetts and 10.7 percent for the U.S. These rates are significantly lower than in December, but still are well above pre-pandemic levels. The number of marginally attached unemployed remains at levels experienced during the Great Recession (2008/2009) and may include persons who intend to re-enter the regular labor force once they are convinced it is safe to return to work and/or after schools and childcare options fully return to normal operations.

Spending in Massachusetts on items subject to the regular sales and motor vehicle sales taxes grew robustly in the first quarter, at an annual rate of 39.2 percent after growing by 2.8 percent in the fourth quarter of last year. Relative to the first quarter of 2020, this spending is up 13.1 percent and is consistent with strong growth in durable goods spending at the national level.

Growth is expected to remain strong through the spring and summer months, with Massachusetts real gross domestic product projected to rise at 7.5 percent annual rate in the second quarter and 8.5 percent in the third quarter of this year. Significant threats to the state's economic outlook include unexpected delays or disruptions to the pace at which the population becomes vaccinated, the unforeseen emergence of vaccine-resistant viral variants, and supply bottlenecks due to supply chain disruptions or labor shortages domestically and internationally. The strong U.S. economy may be lifting global growth, but if the slow pace of vaccinations in much of the world persists, it can be expected to serve as a constraint on growth in the U.S. going forward.