Data do not reflect the full impact of COVID-19; Q2 expected to be the worst quarter on record 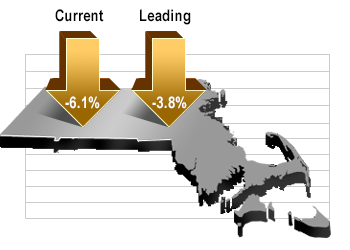 In the first quarter of 2020, based on the best information available today, MassBenchmarks estimates Massachusetts real gross domestic product (GDP) declined at a 6.1 percent annualized rate while U.S. real gross domestic product declined at a 4.8 percent rate according to data released by the U.S. Bureau of Economic Analysis (BEA) earlier today. In the fourth quarter of 2019, both Massachusetts GDP and U.S. GDP expanded at a 2.1 percent annualized rate.

The Massachusetts and U.S. economies currently are in a recession that began in the second half of March, triggered by the impact of the COVID-19 pandemic. The negative growth rate estimates for the first quarter of this year do not reflect the full severity of the pandemic-induced downturn. This is because the economic indicators used to estimate growth primarily reflect economic activity that preceded the sharp downturn that began in the middle of March. Two key labor market indicators for March — payroll employment and the unemployment rate — reflect conditions between March 8th and March 14th, prior to the shutdown of non-essential businesses that began in Massachusetts on March 24 and before the sharp rise in unemployment claims that began on March 15. Regular state sales tax revenues in March reflect purchases made in February, and first quarter wage and salary income includes what was an apparently strong "bonus season" based on income realized in January and February.

The leading index is projecting that the state's economy will contract at a 3.8 percent annual rate between March and September. This vastly understates the magnitude of the decline in the economy that has already occurred between mid-March and today.

"Between March 15 and April 18, 650,000 people filed unemployment claims in Massachusetts," noted Alan Clayton-Matthews, MassBenchmarks Senior Contributing Editor and Associate Professor of Economics and Public Policy at Northeastern University, who compiles and analyzes the Current and Leading Indexes. "This implies that the number of persons unemployed, on layoff or furlough, or who lost their job because of the pandemic accounted for roughly 20 percent of the labor force as of mid-April. Therefore, the actual decline in Massachusetts gross domestic product in the second quarter is expected to be on the order of 25 percent to 50 percent on an annualized basis," Clayton Matthews added.