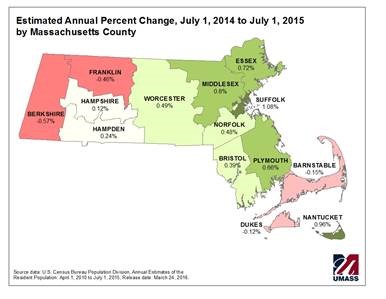 According to Census estimates released today, Suffolk County continues to lead the state in growth, increasing by 1.1% over last year, due to a large number of births over deaths and a high rate of international immigration off-setting population lost through domestic out-migration.  Suffolk County also surpassed Essex County in population this year for the first time since the 1980’s.  Other counties showing strong growth include Nantucket, Middlesex, Essex, and Plymouth.   In Western Massachusetts, Hampshire and Hampden counties show only slight increases in population, while Berkshire and Franklin counties continue to lose population.  The Cape and Island counties Dukes and Barnstable, also lost population in the past year, mostly due to the number of deaths outweighing the number of births in these “older” counties.

For more details on the Massachusetts state-level population and components of change estimates, including a comparison to the Northeast Region and the U.S., see our December 23, 2015 summary report or download the report directly.