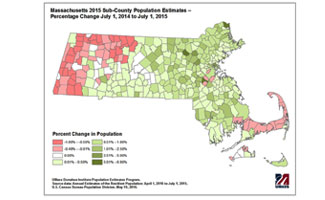 According to the Census estimates, most places in Massachusetts (79% of all cities and towns) grew in population from 2014 to 2015. Consistent with recent years, most of the fastest growing places were in the eastern part of the state -  including a large proportion of towns in Middlesex County and other areas close to Boston – while most towns in Franklin, Berkshire, and Barnstable County lost population over the year.

Follow this link for more detailed information including maps showing population changes from 2014-2015 and 2010-15.