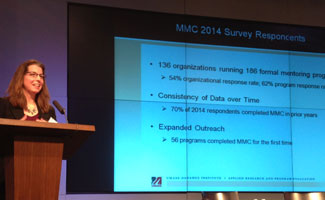 Mass Mentoring Partnership held their State of Youth Mentoring Forum on March 24 at Bank of America in Boston to release the results of the 2014 Mass Mentoring Counts survey of mentoring programs, sponsored by Bank of America and conducted by the UMass Donahue Institute. The Mass Mentoring Counts survey has been conducted by UMass Donahue Institute biennially since 2006. It surveys mentoring programs throughout the state to gain insights into how youth are being served.

For the first time, MMP also surveyed youth-serving organizations in four key regions of the state. The goal of this research was to better understand how these organizations were engaging with young people in empowering youth-adult relationships.

At the March 24 event, Donahue’s Jill Capitani presented the results of both surveys to the attendees. Lt. Governor Karyn Polito also spoke about the Baker administration’s commitment to mentoring and shared personal stories about mentoring from her own life.

There was also a panel discussion about the survey results and what they mean for the future that included representatives from the City of Boston and a mentoring/youth development program.