Scholars from around world learn about U.S. political system 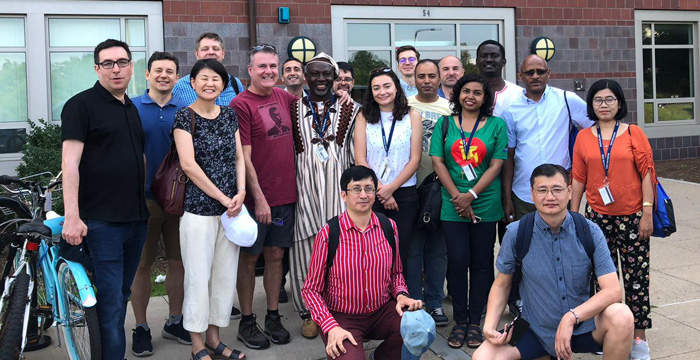 A multinational group of scholars interested in the U.S. political system are traveling the east coast after a busy schedule of academic work at UMass Amherst. The “American Politics and Political Thought” program is funded by the U.S. Department of State and administered by the UMass Civic Initiative, a group of UMass Donahue Institute.

The group arrived on campus in late June and participated in several weeks of sessions that covered the U.S. Constitution, the American presidency, federalism, civil liberties, religion and politics, and political parties. They also enjoyed off-campus trips including the Chesterfield, MA 4th of July parade, the Montague Bookmill, Shelburne Falls’s “Bridge of Flowers”, and meetings with the mayor and police chief from the city of Northampton.

The group is currently on a study tour that includes Boston, Washington DC, New York City and several locations in Pennsylvania including the state capitol in Harrisburg.

For more information about this program and other exchange programs run by the U.S. Department of State, go here.

Go Back
Home
NewsInstitute NewsScholars from around world learn about U.S. political system
Top of Page