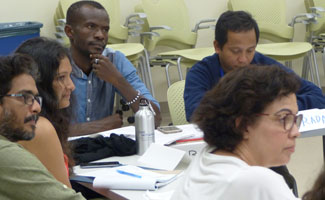 Nearly 20 professors from as many countries met recently with an Assumption College philosophy professor about the American conservatism movement. The lecture was one of a series attended by the group as way to strengthen curricula and to improve the quality of teaching about the United States in academic institutions abroad.

The international group is studying on the UMass Amherst campus as part of the US Department of State’s “Study of the U.S. Institutes for Scholars on Political Thought" (SUSI) which is locally hosted by the University of Massachusetts Civic Initiative.

The international group arrived in late June and has been busy with coursework in American politics including the U.S. Constitution, the American presidency, religion and politics and political parties. The group will also travel from Amherst to Boston, Washington DC, New York City and several locations in Pennsylvania.

The UMass Civic Initiative, a business group of UMass Donahue Institute, has hosted SUSI groups every year since 2005.