International exchange can still happen, even if it's over Zoom

A freeze on international travel to and from the United States due to the ongoing pandemic has presented significant challenges to the UMass Civic Initiative. The summer 2020 programs were postponed for 2021 and the format of this year’s programs are still unknown (virtual or in-person). However, “Civic” has rolled with the changes continued its worldwide reach. 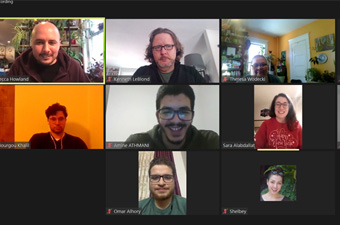 Civic Initiative Director Dr. Michael Hannahan led a series of virtual talks on the U.S. elections to embassy audiences in Singapore (both pre and post elections), Guyana, Jordan, Argentina, Azerbaijan and Egypt. Domestically, Dr. Hannahan was a panelist in September on “Constitutional Issues and the Election” hosted by the University of Texas, Austin. He was also a part of the Distinguished Lecture Series hosted by the Lenox (MA) Library where he spoke about the U.S. elections.

The Pakistan alumni of the Study of the U.S. Institutes got together with Dr. Hannahan to talk about the U.S. elections. They later had a session with Dr. Raz Sibii of the UMass Amherst Journalism department about the threat of disinformation.

Go Back
Home
NewsInstitute NewsInternational exchange can still happen, even if it's over Zoom
Top of Page