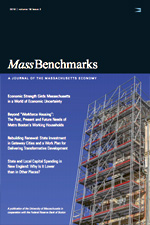 Economic Strength Girds Massachusetts in a World of Economic Uncertainty
The state's economy continues to grow at a moderate but steady pace, with further gains in state GDP and employment, and with unemployment remaining low by historical standards. The global economy, however, continues to pose risks.
• Alan Clayton-Matthews and Robert Nakosteen

Beyond "Workforce Housing": The Past, Present and Future Needs of Metro Boston's Working Households
The ongoing retirement of 700,000 Baby Boomers and their replacement by new workers is exacerbating an accelerating housing crisis in Greater Boston. Projections indicate that the region will need 200,000 additional units by 2030 to house new working families.
• Tim Reardon, Meghna Hari, and Jessie Partridge

Endnotes: State and Local Capital Spending in the New England States: Why Is It Lower than in Other Places?
U.S. Census data from 2000-2012 reveal that state and local governments in New England have been spending less on capital investments than their counterparts across the nation. This article explores possible causes and capital spending differences among the New England states.
• Ronald Fisher and Riley Sullivan