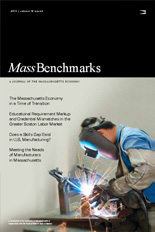 Excerpts from the Board
By and large, Massachusetts is on track for moderate economic growth over the next two quarters. Alongside that, however, is a dampening of the state’s export performance and continuing economic struggles beyond the Metro Boston region, notably in some of the state’s Gateway Cities.

The Massachusetts Economy in a Time of Transition
The Massachusetts economy’s growth continues to outpace the nation’s in spite of headwinds that include a slowdown in international trade, and low business investment.
(Michael Goodman and Robert Nakosteen)

Educational Requirement Markup and Credential Mismatches in the Greater Boston Labor Market
Greater Boston’s high educational attainment has resulted in a “college mark-up” for many jobs and creates added hurdles for those with less education and training.
(Mark Melnik)

Does a Skills Gap Exist in U.S. Manufacturing?
The manufacturing workforce challenge is not as large as some have claimed but a real gap exists between employers and educational and training institutions.
(Andrew Weaver)

Endnotes: Meeting the Needs of Manufacturers in Massachusetts
The Advanced Manufacturing Collaborative is supporting manufacturing in the state by coordinating policies, strategies, and empowering regional partnerships.
(Eric Nakajima)