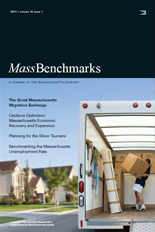 This issue of MassBenchmarks explores population shifts in Massachusetts and their future implications for the Bay State's economy. Following our analysis of the state's economy, articles analyze migration to and from the Commonwealth, the state's shifting age profile, and the interplay between educational attainment and unemployment.

Cautious Optimism: Massachusetts Economic Recovery and Expansion
In recent months, Massachusetts has experienced a stronger housing market, renewed consumer spending, and the fastest population growth in the Northeast. Optimism also stems from the state's growth of over 50,000 jobs last year, though that is tempered by an unemployment rate that is stubornly high, especially outside of Greater Boston.
(Daniel Hodge and Robert Nakosteen)

Planning for the Silver Tsunami
Continued domestic out-migration, declining birth rates, and — most notably — an aging baby boom population are contributing to a long-term slowing of the state's population growth rate.
(Henry Renski)

Benchmarking the Massachusetts Unemployment Rate
The author decomposes the unemployment rate to better understand how unemployment varies and is influenced by age and educational attainment.
(Alan Clayton-Matthews)