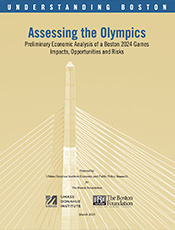 The Boston Foundation commissioned UMass Donahue Institute’s Economic and Public Policy Research group to study the short-term economic impact of hosting the Olympics on Massachusetts, as well as an examination of the long-range opportunities and risks associated with hosting the Games. The Institute used a customized economic impact model for the state to estimate the direct, indirect and induced job creation and economic activity related to Olympic construction, Game operations and tourist spending. Overall, the research found that, assuming the Olympics are executed as currently planned and at its current budget, the Games would have a positive short-term impact on the Massachusetts economy.

Despite the positive short-term economic estimates, it should be noted that there are still several significant aspects regarding the Olympics that are unclear or uncertain. These uncertainties make it difficult to fully quantify the impacts associated with hosting the Olympics. A continued close examination of the Olympic bid is necessary for the region to fully understand the potential benefits and risks associated with hosting the Games. Particular concerns noted by UMDI include the legacy impact of hosting the Games in terms of economic development and tourism, the real possibility of cost overruns and the uncertainty of transportation and public infrastructure funding.