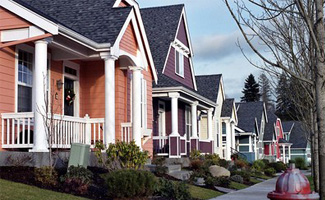 A new analysis by the Massachusetts Housing Partnership‘s Center for Housing Data has found the Boston area could create around 253,000 new housing units if the neighborhoods within a half-mile of the area’s 261 commuter rail, Green Line and subway station were moderately densified.

While parts of the MBTA network are the sites of dense, transit-oriented development, around 62 percent have fewer than 10 dwelling units per acre – roughly comparable to densities found near Red Line stations in residential areas of Boston’s Dorchester neighborhood – and 46 percent have fewer than five homes per acre. Many of those less dense stations are found along commuter rail lines in the area’s suburbs and represent 60 percent of the land within a half-mile of every transit station in Greater Boston, MHP found after combining several datasets to produce an overall count of housing units in each station area.

The University of Massachusetts’ Donahue Institute projects Greater Boston needs to produce around 320,000 housing units between 2010 and 2025 to keep up with demand, and is currently falling short of that goal